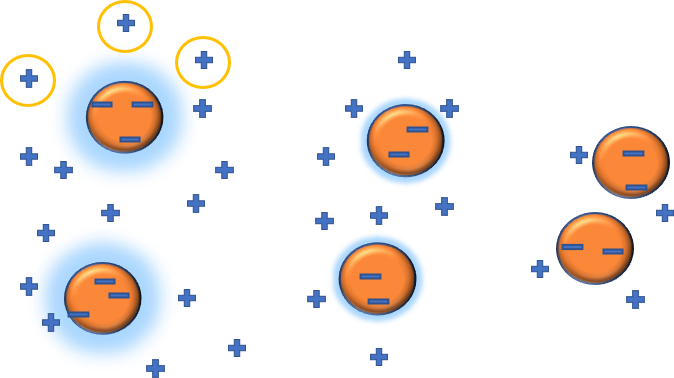 The treatment plant is designed to remove suspended colloidal material as well as the dissolved charged particles found in cow slurry. This is accomplished through electrostatic mechanisms for particle coagulation and flocculation.

Two main mechanisms are employed for the removal of charged particles from the waste water streams. These are charge neutralisation and sweep flocculation.

What is Charge Neutralisation?

Coagulation is the process of neutralising the electronic surface charges of particles, fibres and colloidal material in water and keep them suspended.

Colloidal material can be described as any matter that is one-tenth of a millimetre or smaller which is suspended in an aqueous solution.

The addition of cationic charges neutralizes the anionic surface charges, allowing the particles to come within contact with one another.

A flocculant can then be used to bind the coagulated particles together. Flocculants tend to have opposite charges to the coagulant which then attract and agglomerate the particles.

What is Sweep Flocculation?

Sweep flocs can be described as large aggregates of mineral salt hydroxides e.g. Al(OH)3 or Fe(OH)3 that are formed when salts of aluminium (Al) e.g. poly-aluminium chloride or iron (Fe) e.g. ferric chloride is added to water. Further, the insoluble hydroxides (at certain pH) form an electrostatically positively charged molecular net which attracts, captures and binds on to the negatively charged colloidal particles in the liquid, causing the colloids to become enmeshed in the sweep floc.

Once the flocs are formed, the suspended solids can be mechanically separated from the liquid phase.